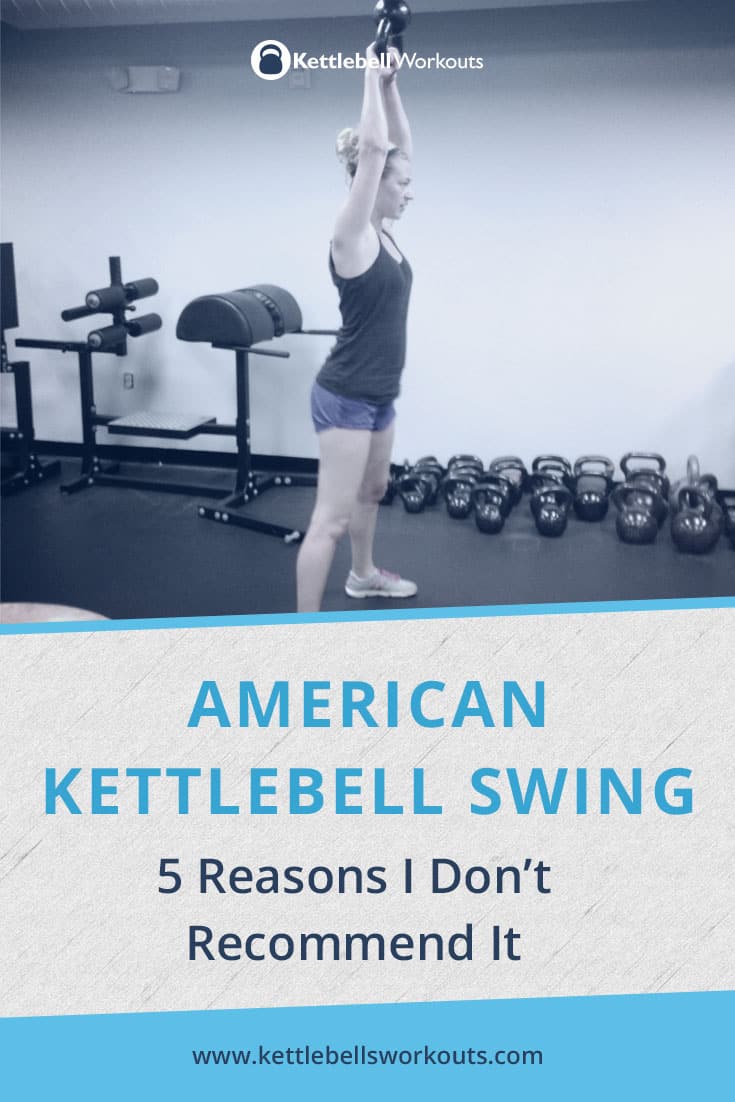 The initial part of the American Kettlebell Swing is the same as the conventional swing except the kettlebell is taken overhead rather than stopping at chest height.

Many people, mostly Crossfitters,  are true fans of the Overhead Kettlebell Swing but I find the risks of this exercise far outweigh the rewards.

Here are 5 reasons why I don’t recommend the American Kettlebell Swing:

The shoulder is a very complicated joint needing to be both mobile for movement and stable for support.

Whenever the arms go above shoulder height then the shoulders have to work much harder to stabilise the kettlebell. For beginners overhead exercises can cause real problems because basic stabilisation strength has not yet been developed.

More advanced lifters can also have issues with overhead exercises due to a lack of shoulder mobility leading to compensations further down the kinetic chain. (see no. 2 below)

Holding the kettlebell with two hands and swinging overhead also puts the shoulders into an unnatural position, try raising both hands overhead together and feel the strain on your shoulder joints.

As a deadlift based exercise that works predominately into the buttocks, hamstrings and core muscles I don’t see the benefit of jeopardising the shoulders by lifting overhead.

Most people nowadays due to more sedentary lifestyles suffer with mobility issues concerning the shoulders or thoracic spine.

When you swing a kettlebell overhead tight shoulders or a limited upper back will lead to a compensation of movement further down the body.

You can perform a simple experiment to see how this affects you.

Stand with your back against a wall and swing both arms overhead, as if swinging a kettlebell. You will notice that as your arms get closer to the wall behind you your lower back arches and moves away from the wall.

Repeated overhead swings will continually arch and aggravate the lower back as you compensate for the lack of movement in the upper body.

Learn more: 7 kettlebell swing mistakes that will cause back pain

The power for the kettlebell swing comes from the hips regardless of which variation of swing you are using.

So by using the overhead kettlebell swing you have a lot more time in between reps especially at the top of the swing when the kettlebell hangs.

You will need a greater hip drive to propel the kettlebell overhead for the American Swing but ultimately you will perform a lot less reps than with the regular swing.

For most of the people I coach I want to get in more reps in less time to promote cardio benefits, so the Overhead Kettlebell Swing is less efficient for this.

Watch a Video of the Regular Kettlebell Swing below:

As I mentioned above the American Kettlebell Swing requires a greater force production from the hips to drive the kettlebell overhead.

In order to power the kettlebell overhead you will need to use less weight than the conventional swing to avoid bad technique and compensations in movement.

To develop strength and overload the glutes, hamstrings and core muscles load is important so I prefer to use more load over a shorter range.

The heavier the weight the more careful you need to be to avoid injury so keeping the swing low and avoiding bad technique and shoulder issues are a sensible choice.

Related: How to progress your workouts without adding more weight

The kettlebell swing is not an easy exercise for beginners to master.

First beginners need to master the basic hip hinge movement, then how to isometrically hold the back flat during dynamic movement, and finally how to avoid overextension at the lower back all while coordinating timing with the arms and the kettlebell.

The American kettlebell swing requires an even greater hip drive than the regular swing often leading to an overuse of the arms due to a lack of power.

A lack of power from the hips will also see an excessive lower back extension and many participants will lean backwards just to get the kettlebell into the top position.

Yes you could argue that coaching is everything but why take an exercise that is often performed badly and make it even more challenging.

Conclusion to the American Kettlebell Swing

Above I have listed 5 reasons why I don’t recommend the Kettlebell American Swing.

Repeatedly swinging overhead with the hands together put the shoulders at risk, aggravates the lower back, reduces the amount of work and promotes bad form in beginners.

With any kettlebell exercise you need to consider the true benefits of the movement, what are the risks and what are the rewards.

If you want to work your shoulders and upper body then master the Turkish Get Up to improve shoulder stability before progressing on to the Clean and Press or Snatch exercises.

Ultimate Guide to the Kettlebell Swing

7 Kettlebell Swing Workouts in Under 10 Minutes

Do you still love the American Kettlebell Swing? Let me know more below….

✅ How do Americans do kettlebell swings?

The initial part of the American Kettlebell Swing is the same as the conventional swing except the kettlebell is taken overhead rather than stopping at chest height.

It uses the same muscles as the Russian kettlebell swing (glutes, hamstrings, lower back) except it can cause problems with the lower back due to mobility issues arising from the shoulders and thoracic spine.

✅ Are American Kettlebell swings bad for you?

Repeatedly swinging overhead with the hands together puts the shoulders at risk, aggravates the lower back, reduces the amount of work and promotes bad form in beginners.