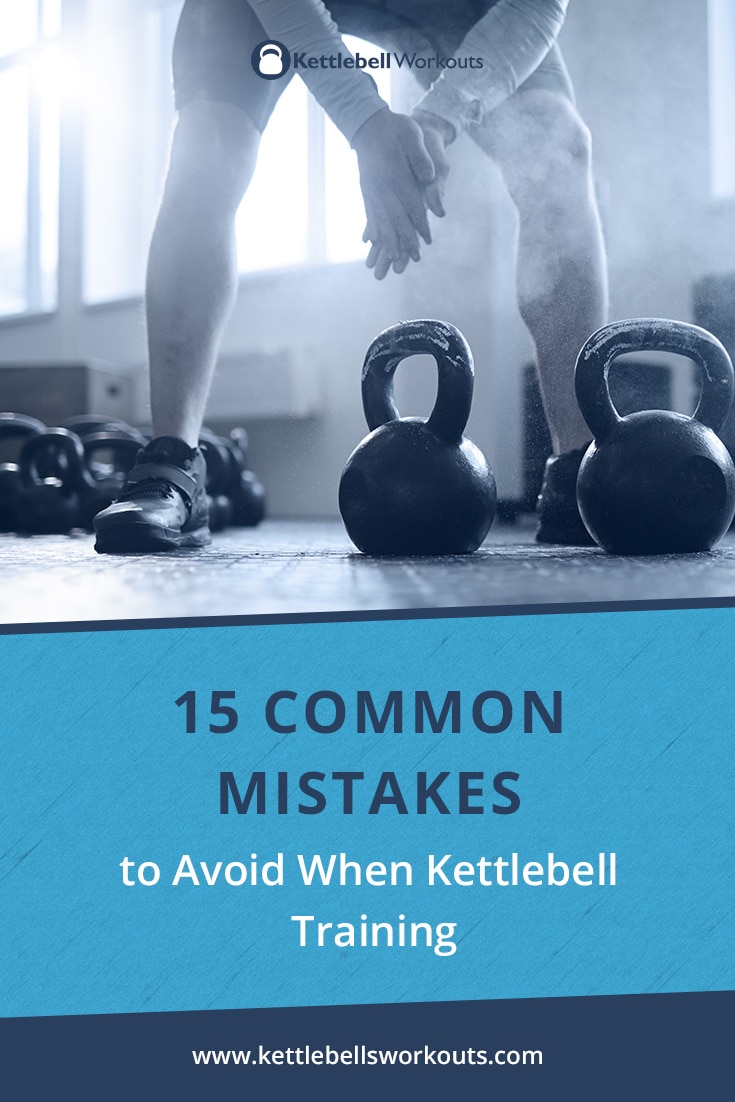 Over the years of teaching kettlebell classes and training other personal trainers I’ve seen many common kettlebell mistakes.

Hopefully by outlining the most popular kettlebell mistakes will prevent you from making the same ones.

So without further ado let’s get started:

1. Not mastering the hip hinge before the swing

However, the kettlebell swing is a dynamic exercise with lots of moving parts. Performing the swing incorrectly will be magnified quickly and can result in injury and problems fast.

Beginners must be patient and master the hip hinge first, then practice the one arm deadlift before progressing onto the kettlebell swing.

The difference in the results achieved will be well worth the extra time invested.

Watch a video on mastering the hip hinge below:

2. Using the shoulders when swinging

Continuing on with the kettlebell swing. A very common problem I see is the arms and shoulders being used to swing the kettlebell rather than an explosive drive from the hips.

Overuse of the shoulders usually comes from an in ability to hip hinge correctly and a lack of hip drive.

The arms and shoulders should really be thought of as an extension to the body and purely are there to guide the kettlebell.

Keep the shoulders back in their sockets and let the hips do all the work.

Watch a tutorial on the kettlebell swing below:

3. Leaning too far backwards when swinging 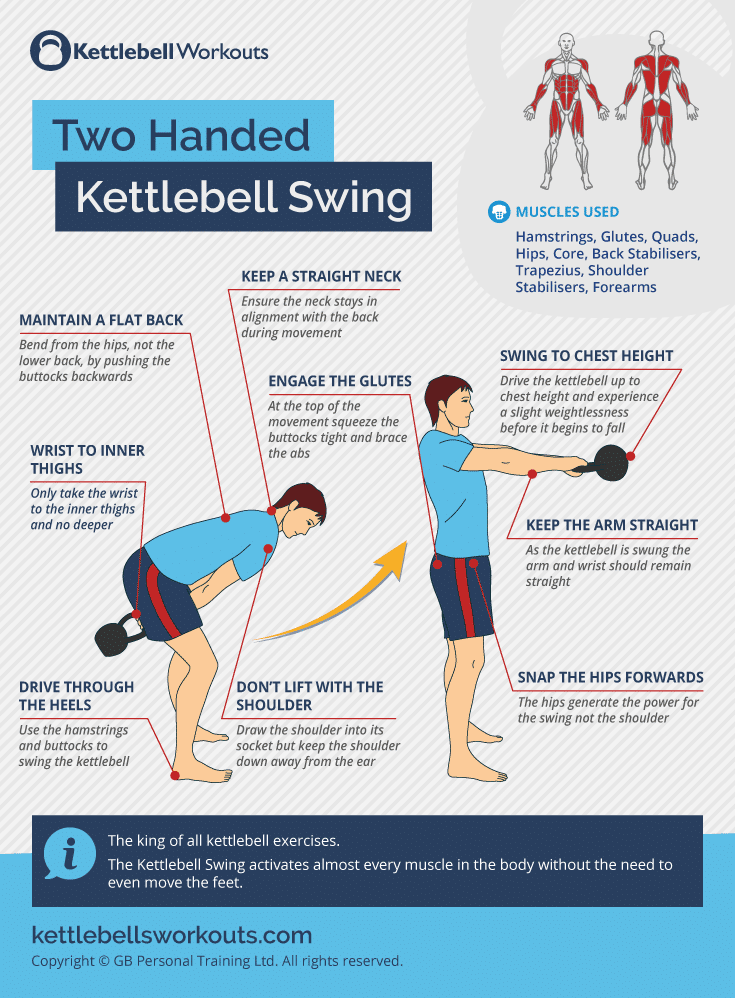 Another common mistake when swinging the kettlebell is leaning too far backwards and putting additional strain on the lower back.

The top position of the kettlebell swing should be bolt upright. Just like a standing plank the abs and core are tight, the glutes are squeezed, and knees locked out.

One useful cue is to think about driving the top of your head upwards and standing tall.

4. Buying and using the wrong type of kettlebell

Unfortunately, most of the kettlebells available to buy have not been designed by people who actually use kettlebells.

Purchasing the wrong type of kettlebell can result in bruised and damaged wrists, unnatural holding positions and the inability to perform many of the exercises.

Competition type kettlebells are only suitable for one handed exercises and are awkward to hold in many of the beginners holding positions including the the all important Goblet Squat.

Here a quick video on what to look for when buying a kettlebell:

5. Cocking or bending the wrist

When holding the kettlebell in the racked position against the chest or when the arm is locked out in the overhead position, the wrist must be kept straight.

If you are using a kettlebell that is designed badly (see above recommendations) then keeping the wrist straight can be painful leading to bad technique throughout many of the kettlebell exercises.

6. Winging the elbow in the racked position

The kettlebells natural resting position for many of the exercises is the racked position against the chest.

In the racked position the kettlebell should be held with a straight wrist, elbow down and against the chest.

A very common issue I see is the elbow being winged out to the side and the kettlebell being held out and against the shoulder.

Ladies will naturally hold the kettlebell slightly further out from the midline due to their breasts but ultimately everything should still be tucked in nice and tight and compact.

Watch a video on the various kettlebell holding positions below:

7. Starting with a kettlebell that is too light

Unlike dumbbell type exercises that isolate certain muscles kettlebell training uses big movements and hundreds of muscles at a time.

As the movements used are compound and multi-jointed the amount you can lift is greatly increased.

The consequence of all this is the ability to lift a lot more weight.

Providing the exercises and workouts are programmed correctly I’ve never met a man or woman who cannot handle these starting weights safely.

8. Starting with a kettlebell that is too heavy

The beauty of kettlebell training is the dynamic movements, the swings and flows.

As you swing a kettlebell its mass increases. The kettlebells mass needs to be accelerated and more importantly decelerated.

Decelerating a swinging 16kg kettlebell takes a huge amount of effort from the muscles as well as the tendons and ligaments.

The upshot of all this is that a 16kg swinging kettlebell takes a lot more effort to control than using say a traditional 16kg dumbbell.

Start with the kettlebell weights that I have mentioned above and avoid having to put your kettlebell training on hold due to an injury.

9. Focusing on isolation exercises rather than compound movements

It’s common to see kettlebells being used like dumbbells.

The main advantage of kettlebell training is the ability to swing and dynamically move from one exercise to the next all the while keeping the heart rate elevated.

If you want to perform more traditional body building type exercises then a dumbbell is a far better tool for the job.

Kettlebell workout programming should be based around progressing and developing movement patterns that use hundreds of muscles at a time and condition the body as one rather than as a set group of muscles.

Watch how you can flow from one kettlebell exercise to the next using 100’s of muscles at a time:

Around every joint there are small muscles that help control and maintain stability and position of the joint structure.

These joint stabilising muscles are built for endurance and not strength. Strength for large movements comes from the prime mover muscles, think Pecs, Lats, Deltoids etc.

A common mistake made when kettlebell training is failing to develop the small stabilising muscles first before working on the large prime mover muscles.

The Turkish Get Up is the perfect exercise for developing these smaller stabilising muscles. 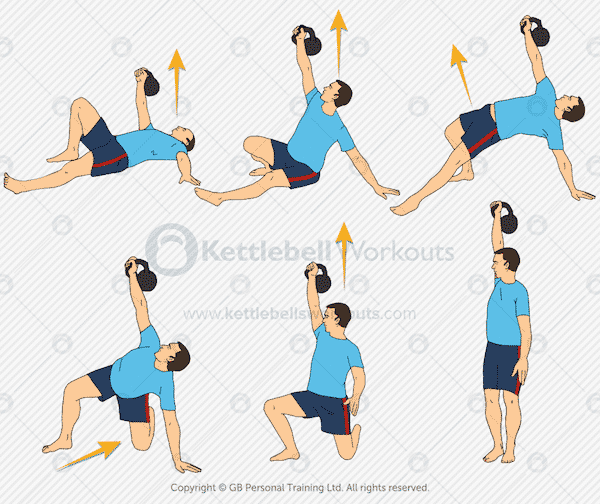 11. Neglecting the kettlebell turkish get up

The kettlebell turkish get up can be a very challenging exercise but that does not mean it should be avoided.

The turkish get up serves as both a full body conditioning exercise as well as an assessment tool.

Failure to master the turkish get up demonstrates weaknesses throughout the body that will later be exploited by more advanced kettlebell exercises.

Beginners can start practicing the get up without a kettlebell or by holding a glass of water before later slowly loading the movement.

Watch the turkish get up in action below:

12. Rushing the kettlebell turkish get up

As mentioned above the turkish get up is a very important exercise that can be challenging to begin with.

It is very common to see the get up movements rushed because by using the body’s momentum it can make the exercise easier.

However, most of the benefits can be lost if you speed through the exercise without performing the various stages correctly.

For example, it is common to see the one heel come up off the floor during the first sitting up stage, this is a clue that the beginner has a weak core and is using their hip flexors to compensate.

The full turkish get up, should take around 45 – 60 seconds per repetition if performed correctly.

13. Swing vs turkish get up imbalances

It is important to balance the body with all types of exercises to avoid compensations, bad posture and injuries.

So if someone is swinging one handed a 16kg (35b) kettlebell then they should also be able to perform a full turkish get up with the same weight. Remember the get up improves joint stability and mobility as well as core strength.

If someone can swing with one hand much more than they can use for a full get up then their is an imbalance and the potential for many issues further on in their training. 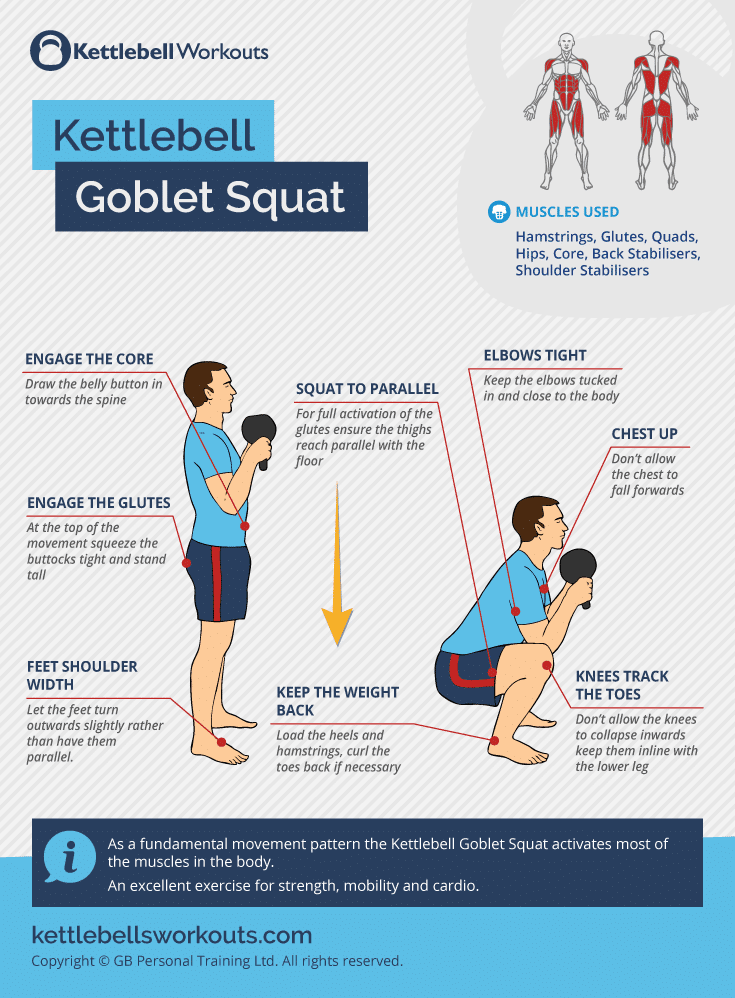 Wow, I see shallow squat technique happen almost on a daily basis in gyms and even with my own clients.

The ability to squat deep is a natural movement pattern that starts off when we are children even before we are able to walk.

When you squat down so your thighs are parallel with the floor you fully engage your buttock muscles (glutes) as well as the quads and hamstrings.

A failure to squat down to parallel eliminates half of the benefits of the exercise as well as developing a shallow pattern that prevents pumping of the joints and reduces mobility.

The majority of people who find the deep squat painful on their knees usually lack the strength / mobility in the movement pattern.

The deep squat pattern can be improved with the use of a holding pole, TRX or sitting down and standing up from a low box.

Until the deep squat is mastered without a kettlebell it should NOT be loaded with a kettlebell.

Watch this video on how to improve the squat using a band:

It is very tempting when someone first starts kettlebell training to look on youtube and see all the exciting new exercises and perform as many of them as possible.

However, kettlebell training should be based upon specific movement patterns that are progressed slowly before moving onto the next variation of the exercise.

As mentioned earlier trying to run before you can walk is never a great idea.

Once the kettlebell can be swung confidently progress on to the turkish get up.

Next, drill the swing and get up in as many ways as possible working up to 60 seconds of continuous swings and 5 non-stop get ups on each side.

Only once these two goals have been achieved should more kettlebell exercises be added.

Have you made any of these common kettlebell training mistakes? Let me know below:

Workout of the Day
App for iPhone
App for Android