You are here: Home / Pull / 10 Kettlebell Exercises for the Back 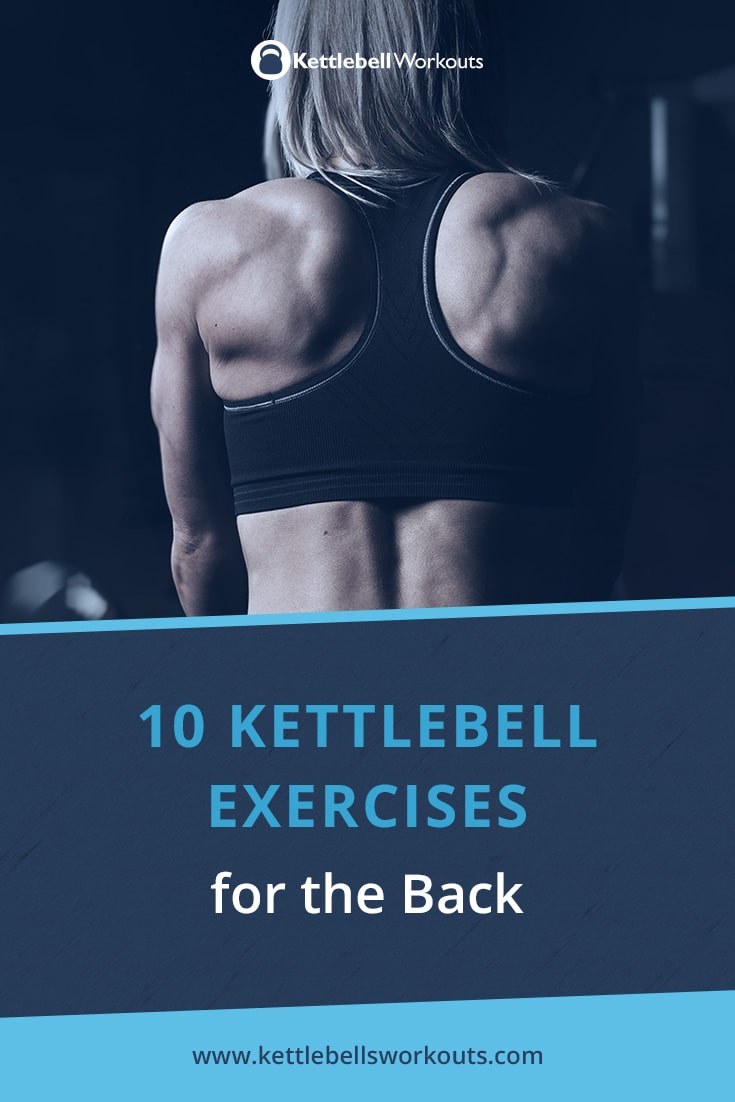 I often get asked: “What are the best kettlebell exercises for the back?“

The beauty of kettlebell training is that it doesn’t rely on specific muscle groups like conventional body building type training.

Instead, kettlebell exercises tend to be programmed by movement patterns which naturally falls in line with the way the body is designed to move.

So the kettlebell exercises that are best for the back tend to be a consequence of the Pulling and Deadlift movement patterns.

Let’s take a look at 10 kettlebell exercises that work into the back of the body:

The exercise is great as a warm up for the shoulder girdle which includes the upper back.

If you slowly work up to a heavier and heavier kettlebell you will notice a huge amount of muscle activation in the upper back muscles.

Great for strengthening the shoulder stabilisers as well as the upper trapezius muscles.

Watch the kettlebell halo in action below:

The deadlift movement pattern involves all those exercises where you are picking something up off the floor with a nice flat back.

The movement is the most powerful of all our movement patterns and therefore uses the most amount of muscles in the body.

No matter what your exercise goals, the deadlift movement pattern should not be ignored.

The single arm deadlift heavily works into the back of the body (posterior chain) starting with the hamstrings and moving up into the Glutes, Lower, Mid and Upper Back Muscles.

As you gradually increase the kettlebell weight you will notice how strongly the single arm deadlift activates the muscles of the back.

The kettlebell single arm deadlift can be performed with just one hand, two hands or with a kettlebell in each hand.

Watch the kettlebell single arm deadlift in action below:

A second exercise based on the deadlift movement pattern but this time used standing on one leg.

The kettlebell is held in the hand on the opposite side of the standing leg. As the exercise is performed the loaded shoulder is connected with the standing hip via a muscular sling.

If you play sports or just want to develop a strong core for rotational movements then this is the exercise for you. Excellent for racket sports.

As with the kettlebell one arm deadlift you will notice lots of muscular activation throughout the back of the body.

Careful consideration needs to be taken when performing this exercise to ensure the back and core muscles are isometrically held tight throughout.

Want more? Everything you need to know about the single leg deadlift

Watch a video of the kettlebell single leg deadlift below:

The kettlebell swing is the cornerstone of all kettlebell training and works most muscles of the body including most of those in the back.

The swing is more dynamic than the 2 deadlift variations above and therefore has more potential for injury amongst beginners.

However, once mastered the swing will develop great explosive power at the hips for sports as well as promoting cardio benefits without the need to move the feet.

In particular the swing works into the lower back as it is required to stabilise isometrically the link between the hips and the upper back.

One common mistake made by beginners is to hinge at the lower back rather than using the hips to generate the power. Hinging incorrectly like this can soon fatigue the lower back and therefore bring an end to the exercise very quickly.

Here’s a tutorial of the kettlebell swing to help you get your technique correct:

Once you have mastered the two handed kettlebell swing you can then progress onto the one handed swing.

The one hand swing will add a little more rotation into the movement as well as increasing the demands on the shoulder stabilisers.

Now onto a more grind based exercise that will add some serious muscle onto the mid back and latissimus dorsi.

The kettlebell row is more of a traditional muscle building exercise but it will require good core strength to maintain the bent over position without compromising the lower back.

If you use just one kettlebell at a time you will get a great anti-rotational stabilisation to the movement as the muscles of the core have to work hard to keep the back flat.

The exercise can be made a lot easier by posting with one arm onto a bench / chair in order to take much of the demands off the core muscles.

However, I would be careful not to isolate the movement too much as weaknesses can develop and cause compensations later on.

Discover more: 6 kettlebell row variations for a strong back and core

Watch the kettlebell regular row in action below:

The Kettlebell Row can also be made more challenging by performing the exercise to the side of the body. To perform the Suitcase Row the feet will need to be kept closer together.

Caution must be taken when performing rowing based exercises to avoid hunching at the shoulders.

The kettlebell clean is again based on the deadlift movement pattern and takes the kettlebell from the floor and into the racked position, on the chest, in an explosive movement.

I’ve never experienced such sore upper back muscles (trapezius) as when I first cleaned a 32kg kettlebell for 60 seconds non stop on both sides.

The cardio benefits of cleaning a challenging sized kettlebell are something that everyone should experience at some time too!

Watch the kettlebell clean in action below:

You can also increase the kettlebell clean to an even more demanding full body exercise by adding a press at the top of the movement or cleaning two kettlebells at a time, one in each hand.

The kettlebell high pull is another dynamic movement that will have your heart racing but it also focuses much of its attention into the mid back.

Unlike lots of other high pull type exercises this particular variation brings the arm back at almost horizontal with the floor ensuring more activation into the mid back rather than the upper back and neck.

The high pull exercise is certainly not for beginners and requires good timing, good wrist strength and also the ability to swing a kettlebell effectively with the hips.

There are a lot of moving parts in this exercise so caution will need to be taken at first.

Watch a video of the kettlebell high pull in action:

The kettlebell bob and weave is a lateral movement which in it’s simplest terms is a sideways lunge holding a kettlebell.

However, as you dynamically move from one side to the other you dip and lean your upper body forwards from the lower back.

Not only will the bob and weave work into your lower back as you move but also the act of holding the kettlebell up at chest height puts the mid back under strain too.

The bob and weave is an underrated exercise that will increase your cardio, improve your hip mobility, legs, glutes, and core as well as the back muscles.

Watch the bob and weave exercise below:

The kettlebell snatch is probably the most dynamic and aggressive full body exercise of all the kettlebell movements.

You certainly will need to have mastered the kettlebell swing, kettlebell clean and kettlebell high pull exercises before moving onto the snatch.

The kettlebell snatch is again based on the deadlift movement pattern and explosively takes the kettlebell from the floor up and into the overhead position in one movement.

There are not many muscles that are not used during the snatch exercise but the back does does take a considerable amount of the load, in particular the upper back muscles during the initial explosive movement.

One fun challenge using the snatch exercise involves performing as many repetitions as possible for 10 minutes changing hands whenever necessary. 200 reps is a good achievement.

Watch the kettlebell snatch in action below:

If you want to work your upper back hard while also challenging your core muscles then this is the exercise for you.

The kettlebell plank row or renegade row starts in the push up position and involves rowing the kettlebell up towards the body while keeping the body in a tight straight line.

The ability to hold a push up plank for 60 seconds is a pre requisite for this exercise.

The kettlebell plank row can be performed with both hands on the kettlebell handles or with one hand on a bench or chair.

The amount of weight you use to challenge your back muscles will depend on the strength of your core muscles and your ability to hold the plank position.

It’s a fantastically demanding exercise that is only usually performed by more advanced exercisers but if you have the strength to perform it correctly then the gains can be substantial.

Watch a video of the plank row in action:

Conclusions of Kettlebell Exercises for the Back

However, the Pull and Deadlift movement patterns do work into the back of the body as well as other muscles.

I’ve listed above 10 kettlebell exercises for the back starting with the easiest and working down to the more advanced.

Caution must be taken not to progress too quickly and to allow time for muscles, ligaments, tendons and motor learning to develop.

Best of luck and enjoy the exercises.

Related: 3 Kettlebell push and pull workouts for the upper body

Have you tried any of these kettlebell back exercises? Let me know below…